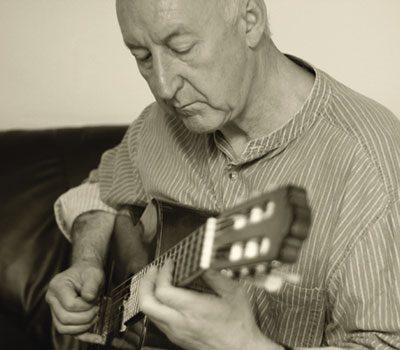 Eddie Baird is a Singer/Songwriter/Guitarist with long established English acoustic group ‘Amazing Blondel’ who first became popular in  the 1970’s touring with bands such as Free, Fairport Convention, Traffic, Steeleye Span, Cat Stevens and many more.

Amazing Blondel reformed in 1997 to record an album ‘Restoration’ and toured regularly in the UK and Europe until 2004.

In early 2009 Eddie began working with John ‘Rabbit’ Bundrick who had provided keyboard services for Blondel on some of their early albums. Eddie provided lyrics and vocals on several new Bundrick-penned tracks, which were then mixed at smallCog Studios. Several of these tracks are available as a download ‘Brundrick/ Baird sessions’ in our shop.

In late 2016, a new collaboration with Darryl Ebbatson, an album titled ‘Doors’ was released featuring 10 new tracks including the ‘spy thriller’ soundtrack ‘Ninotchka’ which is available to listen to on our ‘Sounds’ page. A collection of recollections, it’s not your usual bio starting at a tender age and working through his life, it’s memories that pop into his mind along the way, in no particular order!

Presented as a beautiful hardback book with many unseen, full colour photos, this is a great way to see what goes on in Eddie’s head!

Unfortunately this book is currently out of print, however, we are loking to print an updated version of this book in 2021. Keep an eye out for any news on this!

In 2020 SmallCogMUSIC, Eddie and Mike Billington of Epona Records collaborated on a reissue of 2 of Eddies albums ‘Also’ and ‘Abbey Cottage’
The tracks were digitally remastered by Darryl and are presented as a ‘2for1’ CD.

This CD can be ordered directly from Epona Records HERE

For all other Eddie Baird music available in our Shop, please click HERE!