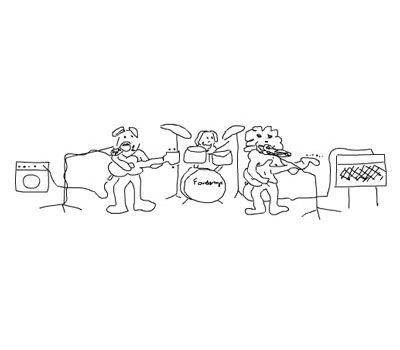 Fandango – A Scunthorpe band with high ambitions and a flair for catchy pop tunes – perhaps too far ahead or too far behind fashion for their own good?

The band started in 1985 when Daz Ebbatson and Martin Rushby – who had been working together on an award winning play ‘Haunted Sunflowers’ joined with local musician Kenny Blades.

After recording 2 songs – ‘Elaine’ and ‘While you were out’ at the famous Chapel Studios in 1985 and 4 songs at Goxhill Studios a year later Martin left the band to move to London.

Ex Zygal Span drummer Kev McArthur took his place for a short time and the band recorded and performed several songs for the Richard Cameron play ‘Dead Beat’ whilst performing regularly around the Scunthorpe area.

Kev left and his place was taken by Andrew ‘Figgy’ Figliuzzi. By this time the material had begun to include keyboards and a second guitarist, Andrew Willcox was brought in to allow Daz to play keyboards live as well.

After another year or so of gigging and new material the band split in 1988.

Daz formed Cartoon and Catflaps with Martin before rejoining Kev McArthur in Murphys Law in 1996 leaving them in 2005.

Fandango briefly resurfaced in their original lineup in 1997 for a charity concert and in 1999 Kenny and Daz played as Fandango with drummer Jay Sikora.