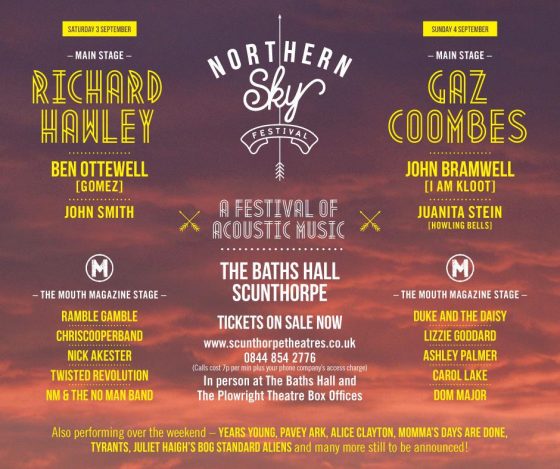 The very first Northern Sky festival will take place at The Baths Hall over the weekend of the 3 & 4 September.

Richard Hawley will headline the festival on Saturday, 3 September. He is known as one of Britain’s greatest songwriters of the past 15 years and in February completed a UK tour which included a sensational stop off at The Baths Hall. He found success in the 1990s in indie band The Longpigs before starting a successful solo career which has seen him nominated for a Mercury Music Prize twice and a Brit Awards once. Last year he released new album ‘Hollow Meadows’.

Gaz Coombes will headline the main stage on Sunday, 4 September. It’s been an extraordinary journey for Gaz Coombes, from flashily whiskered pop tearaway to Ivor Novello and Brit award winning rock star to soundtracking the summer (he was responsible for that sublime cover of The Kinks ‘This Time Tomorrow’ for John Lewis earlier this year). However the mega-watt melodic genius responsible for ten Top 20 hits and six Top 20 albums – I Should Coco was Parlophone’s fastest selling debut since the Beatles Please Please Me – has often obscured the fact that, like any 37 year old, he’s had his fair share of bumps and bruises along the way. It’s these aspects of his journey – including self-doubt, personal loss and drug-induced tour psychosis – which he faces up to on his remarkable new album, fittingly entitled Matador.

Singer and lead guitarist in rock band Gomez, Ben Ottewell will perform on the main stage on Saturday, 3 September. Ben is well known for his unmistakable voice and talent for blistering and inspired guitar solos. Rolling Stone declared, “Gomez’s not-so-secret weapon is Ben Ottewell.” And as GQ Magazine once wrote and anyone listening can attest, “[his] voice is not of this world.” Since his first solo release, Shapes & Shadows (released by ATO, 2011), Ottewell has been pleasing audiences with a series of successful acoustic tours across the UK, US and Australia. Now with a newly-recorded album of songs for his second solo project, Rattlebag, the singer is set to return to the road, performing his new music.